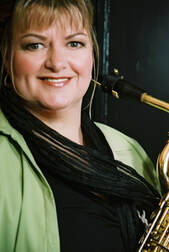 ​Diversity has been the hallmark of Julie Husband's professional musical odyssey - manifested in the instruments she plays and the musical styles she has inhabited.

Julie's two-decade career as a jobbing musician, music instructor, clinic leader and adjudicator is founded on her outstanding instrumental proficiency with all the instruments in the flute, clarinet, saxophone and bassoon families.
​
A graduate of Manitoba's renowned Brandon University (Bachelor of Music), Julie's high performance standards and advanced technical knowledge have combined to make her a first-call hire for gigs as diverse as Rod Stewart and Winnipeg's Gilbert & Sullivan Society.

Colleagues and employers alike routinely use words like "exceptional" and "superb" to describe Julie's peerless musicianship, commitment to her work and almost supernatural sight reading.

Her participation in the Artists in the Schools program in Manitoba is one example of Julie's interest in exploring all musical frontiers as part of her craft. As one half of Duo a la Carte (with pianist/percussionist Heidi Peters) Julie has performed on behalf of this successful in-school initiative since 1988.

The sheer range of talented musicians and performers Julie has played with - and for - is truly breathtaking: Red Skelton, Kenny Rogers, Arturo Sandoval, Dianne Schuur, Bill Watrous, The Wyrd Sisters, Wayne Newton and Winnipeg jazz icon Ron Paley would represent a short list.
On the teaching side, Julie has champions as well. A band instructor in Winnipeg for 12 years, her colleagues underscore her impeccable musical credentials and easygoing attitude toward those around her.

"I sincerely salute (Julie) for her musical accomplishments, and highly endorse her as a trusted and respected teacher and performer in Winnipeg's thriving musical community," says University of Manitoba Faculty of Music teacher and conductor Connie Turner.

Jazz composer and bandleader Ron Paley is no less effusive: "I have known Julie for over 20 years and I will attest strongly to her extremely high musical abilities and her wonderful personal character."

Julie's musical muse has taken her from classical to summer theatre to jazz, with the latter category including work in renowned Winnipegbased outfit Saxology.

Her recorded output has included two CDs with The Swing Cats, a Saxology release, a live disc with the Kerry Kluner Big Band, a Christmas session for Winnipeg's 103 UFM and an inspirational album with Sturgeon Creek United Church in Winnipeg.